the hopi and Ishmael 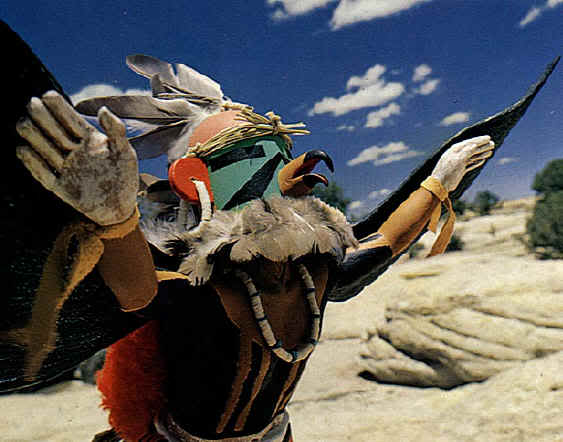 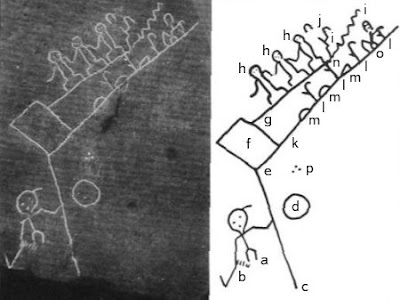 One of the highlights of Lavan Martineau's original 1973 work is a detailed interpretation of one of the most sacred petroglyph panels known to the Hopi tribe. It is known as the Hopi Prophecy Stone or Hopi Prophecy Rock, shown in Figure 7. The Hopi themselves call it the "Hopi Life Plan."[34] We will include a portion of LaVan's interpretation of this important panel of rock writings.


Symbol a represents the Creator pointing down close to the ground from where the Hopi claim to have come. The short vertical lines near the Creator's hand b represent the Hopi people. The Creator is holding in his left hand "the life plan" or "trail" c upon which the Hopi are to embark. Near this hand is a circle d which represents "holding" of the entire continent in trust for the Creator, as he had instructed. (Since this photograph was taken, viewers of this panel have added a bow to the right hand of the Creator which was not apparent when Martineau surveyed the carving.)
Point e on the trail or life plan represents a time when it was predicted by the Creator that the Hopi would digress from the true path given to them and pursue another way. The square f is said to represent Oraibi, and the line or path g coming down from the square represents the false path of the wicked Oraibi . . .
The figures h standing upon the false path represent the wicked themselves. Older Hopi claim that heads have recently been added to these symbols, for they remember a time when no heads existed on these figures. The absence of heads would represent the punishment or death that the wicked must undergo as a result of following the false path.
The two zigzag lines I stemming from the false path represent the careless and different paths to permanent destruction pursued by the wicked. . . .
Symbol k is the true path of everlasting life, symbol l, which is shown at four points along this true path. The incorporation of the symbol old age (a cane) with life (a branching corn leaf) represents everlasting life. . . . The Hopi say that they are gourds which are shaken, thus representing three great wars or shakings that will transpire before the everlasting life is reached. The last circle represents the "final war" of purification in which all evil will be destroyed.
At point n on this panel the false path connects with an everlasting life symbol, showing that some may return to the true path and to everlasting life. The two zigzag lines which extend beyond this point of possible return to the path of everlasting life thus truly indicate permanent destruction, since the wicked have gone beyond this point of no return. Symbol o, at the end of the path is the great spirit holding an everlasting life symbol in his hand. He is shown waiting here at the end of the trail just as he was shown at the beginning of it. For this reason he is called the first and the last.
Those of you that have read Ishmael will be able to read this hopi prophecy. Around 10,000 years ago there was a split in the road. Some humans  chose a  path that has lead to what we see now which is destruction by overpopulation  ( growth is good for an economy)and some humans chose everlasting life  on this planet by living with nature and natural law (natural population control ). Walking away in peace will be the most successful revolution.I don't even want revolution I want evolution.